The United States is underinvesting in its drinking water and wastewater systems—putting American households and the economy at risk, according to a new report released today by the American Society of Civil Engineers (ASCE) and Value of Water Campaign.  The report, “The Economic Benefits of Investing in Water Infrastructure: How a Failure to Act Would Affect the U.S. Economy Recovery,“ finds that as water infrastructure deteriorates and service disruptions increase, annual costs to American households due to water and wastewater failures will be seven times higher in 20 years than they are today — from $2 billion in 2019 to $14 billion by 2039. 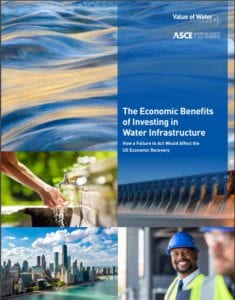 America’s water infrastructure is aging, with many drinking water systems and wastewater treatment facilities nearing the end of their respective design lives (75-100 years), causing contamination and economic disruptions to communities. Between 2012 and 2018, the rate of water main breaks in the US rose by 27 percent to roughly 300,000 breaks per year — equivalent to a break more than every two minutes. The US lost an estimated $21.7 million of treated water in 2019 due to leaks, which is projected to reach $48 million by 2039 with current investment trends. In addition to the impact to households, American businesses most reliant on water will spend $250 billion in 2039 on water service disruptions.

In 2019, water service disruptions resulted in $51 billion economic loss for 11 water-reliant industries such as education, health services, retail, construction, manufacturing, and more. With the current trajectory, service disruptions will cost water-reliant businesses an estimated $116 billion by 2029 and will soar to $264 billion by 2039. With damage and flooding from increasing storms, in addition to water shutoffs and deteriorating infrastructure, production costs for businesses and prices for consumers are expected to climb. The report finds that more than $625 billion in business sales (gross output) would be lost over the next 10 years. By 2039, that number will near $3.9 trillion. Failing to invest would cause reductions in wages and disposable income; by 2039, 636,000 jobs would be lost annually.

The report also notes that the future does not have to look this bleak. If investment is increased to address these shortfalls now, the US GDP would grow by $4.5 trillion in 20 years. This investment would create 800,000 new jobs and household disposable income would rise by more than $2,000 per household.

A research team comprised of EBP, Downstream Strategies and the Interindustry Forecasting Project at the University of Maryland (INFORUM) worked with ASCE and the Value of Water Campaign to develop this analysis. Download the report.