In a Senate Committee hearing on the Reauthorization of the National Flood Insurance Program, ASFPM Executive Director Chad Berginnis provided testimony on the program’s importance to helping families and communities become more resilient to flooding and offered recommendations on how it can be strengthened to better address current and future flood risk and ensure greater equity. 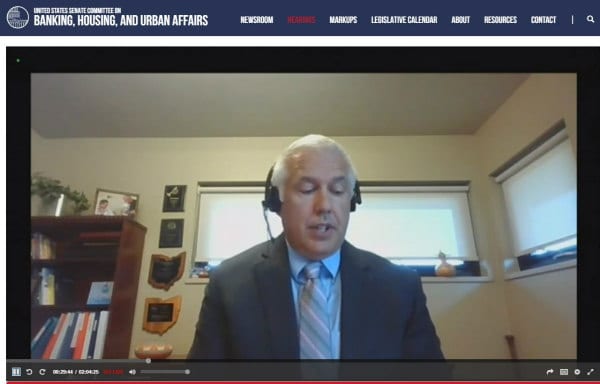 The May 18 hearing before the Senate Banking, Housing, and Urban Affairs Committee provided ASFPM with the opportunity to provide input on the NFIP—something the association has done on every NFIP reform effort since the 1980s.

During the hearing, Berginnis urged the committee to re-prioritize flood mapping, which was a significant part of the 2012 NFIP reform but even FEMA admits it has fallen short on the ambitious national flood mapping effort. Although the agency has improved the quality of existing maps, there’s still 2.3 million miles of streams, rivers and coastlines that haven’t been mapped. Many of these areas continue to be developed.

“We’re doing this backwards,” he said. “The most impactful thing is to get the job done mapping the nation and also include what future flood risk is going to be because then local codes and standards can get adopted to make sure that that house is resilient to flooding 50 or 100 years down the road as opposed to building to today’s flood risk standard.”

As detailed in its written testimony, ASFPM said that to improve flood mapping in the nation:

Of course, floodplain mapping is just one leg of the four-legged NFIP stool. There’s also floodplain management, flood hazard mitigation, and flood insurance; and each are addressed in ASFPM’s written testimony and were discussed in various forms throughout the nearly two-hour hearing.

In terms of mitigation, Sen. Elizabeth Warren (D-MA) asked whether, given the strong return on investment mitigation provides, the country is spending enough to lower the long-term risks of flood loss.

“The answer is no. Not by a long shot,” said Velma M. Smith, a senior officer of government relations with Pew Charitable Trusts. “We’ve been stingy in pre-disaster investment and that ends up costing us in damage, not just to property, but to lives and livelihoods.”

FEMA’s proposed new premium rating approach called Risk Rating 2.0 also received considerable attention during the hearing. ASFPM supports Risk Rating 2.0 and believes the change to a new rating system is long overdue. Although there’s still much to be learned to ensure a smooth rollout, a more accurate, fair, and equitable way to determine an individual property’s flood risk should increase public confidence in the program and put NFIP on stronger financial footing.

“One of the strong arguments for Risk Rating 2.0 is that preliminary data from FEMA suggest it will make the rates more equitable and just,” said Berginnis. “We also recognize that the NFIP will need a targeted, means tested affordability program. Mitigation efforts through FMA could be made more just by FEMA evaluating how other policies like relocation assistance and benefit cost analysis can be changed to recognize equity and social dimensions of flooding.”

A number of senators voiced support for Risk Rating 2.0, including Sens. Thom Tillis (R-NC) and Steve Daines (R-MT), who said the plan “enjoys broad support in Montana.” While others, particularly those who represent coastal states, expressed concerns about rate increases or chastised FEMA for what they feel is a lack of transparency during the initial rollout of the new NFIP rating system.

“Unfortunately, what I’ve heard from some of the witnesses today concerns me and runs counterintuitive to the whole purpose of the NFIP,” said Bob Menendez (D-NJ). “The great solution, as some say to the problems of the NFIP, is to raise premiums. That makes the most vulnerable to flooding pay extremely high premiums for their coverage. The reality is, the more you put onto the back of the policyholder, the more people leave the program altogether.”

According to FEMA, only 4% of policy holders nationwide are expected to see substantive increases. In a national rate analysis of current policy holders, FEMA has said:

Berginnis also acknowledged one of the greatest threats to the NFIP program: debt. In his testimony, he encouraged Congress to rethink how it handles NFIP debt.

“It is time to recognize the progress that FEMA has made with managing the financial risk of the program, recognize that the NFIP was never designed to handle today’s catastrophic flood events, and recognize the broader societal benefits of the NFIP by forgiving the debt and establishing a threshold like a sufficiency standard above which debt is treated like disaster assistance and appropriated through disaster supplementals,” he said.

Debt was also on the mind of Sen. Pat Toomey (R-PA). In his opening remarks, the ranking member noted that since Hurricane Katrina in 2005, the NFIP has had to borrow nearly $40 billion from the U.S. Treasury in order to pay claims. Toomey said Congress should “continue to explore opportunities to bring more private capital into the flood insurance business.”

In his opening remarks, Committee Chairman Sherrod Brown (D-OH) spoke to the importance of the NFIP program, which provides over $1.3 trillion in coverage to more than 5 million homes and businesses in over 22,000 communities, and the need for a comprehensive long-term solution.

“No matter where you live, everyone pays for the financial fallout from floods, as the country spends tax dollars to help families and communities recover,” Brown said. “We know we must take action to protect communities from climate change, and seize all of the opportunities that come with that effort. That’s going to be a long-term effort. While we seek to halt the trajectory of our changing climate, we also need to help our families and communities become more resilient to the flooding we face now and in the coming decades, and whenever possible, avoid it altogether.”

In its written testimony, ASFPM encouraged Congress to take a holistic approach to any reform efforts.

“ASFPM is always vigilant when it comes to NFIP reforms. We have seen far too many ideas over the past several years that would change one element without consideration of how that change would impact the other elements of the NFIP (for example changes in insurance shouldn’t weaken the role of either mitigation or floodplain management). We must ensure that reforms carefully contemplate the potential impacts to the overall comprehensive approach to flood risk management that the NFIP provides so that we strengthen the nation’s overall resilience to flooding.”

In addition to Berginnis and Pew’s Smith, others providing testimony include Rebecca Kagan Sternhell with New York City Office of Federal Affairs, Stephen Ellis of Taxpayers for Common Sense, and R.J. Lehmann of the International Center for Law & Economics. FEMA did not testify at the May 18 hearing, but will be invited to a future hearing to discuss the status and reauthorization of the program, Brown said.

You can watch the recording of the testimony and download the written testimonies provided by the witnesses here: Reauthorization of the National Flood Insurance Program, Part 1