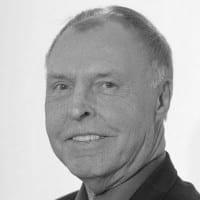 Larry Larson is a founding member of ASFPM, which was established in 1977. He was the national chair from 1979-82 and volunteered as the executive director from 1982 until it became a staff position in February 1997. He then served as the association's executive director until 2012, when he became the director emeritus. As the director emeritus he serves as policy advisor to the ASFPM executive director and leadership of the association. These policy issues range from national flood and water policy to policy of all agencies whose programs impact flood-risk management in the nation. Besides FEMA and the Corps of Engineers, this would include policies and programs promulgated by agencies such as USDA, NOAA, EPA, DOT, DOI and Commerce, as well as the White House and Congress. Larson has worked in the water resources profession for 54 years since graduating from the University of Wisconsin - Platteville with a B.S. in Civil Engineering. He is a registered Professional Engineer in Wisconsin and California.